This question comes up for discussion with customers sometimes at our store, but usually hits home when actually on the trail and we run into either the uninformed, or something of a trail jerk. Hopefully this article can help reduce the number of both! "Who has the right of way on the trail?" This common sign is a good place to start:

As suggested by the sign, horses have priority over both hikers and bike riders, and hikers have priority over bike riders. Horses aren't as nimble as the other two, and take up a lot of space, so it makes sense for the others to give way to the lumbering giants. While doing so, make sure the horse can see you; that is, don't step behind a tree or corner awaiting the horse(s) to pass, as that triggers a predator-in-hiding concern in the horse. Abide by any special instructions the horse rider may have - he knows his horse and how she might react to certain conditions.

The sign might say that riders should give to hikers, but I sure don't expect it as a lot of bike riders apparently don't see that sign. At least not the ones around our backpacking store in the Phoenix area! And in fairness, in most cases it's probably easier for the hiker to get out of the way and let the rider barrel on through than have the rider stop, get off and then resume, especially if headed uphill at the time. I believe the guideline is there because the biker needs to be in control and be prepared to slow/stop so as to not run over hikers, which might happen more often if it was written the other way. Discretion is the better part of valor, so I usually let the biker through if there's only room for one at a time, but if there's a "wreck" between the hiker and biker, the biker would probably be held as the bad guy.

And a side note to guys on bikes - if you come up on an isolated hiker from behind, probably lost in thought, don't give him/her a heart attack by waiting until you're about 5 feet behind and then yell "ON YOUR LEFT!!!". Try it further back in a lower tone; we'll still get out your way. 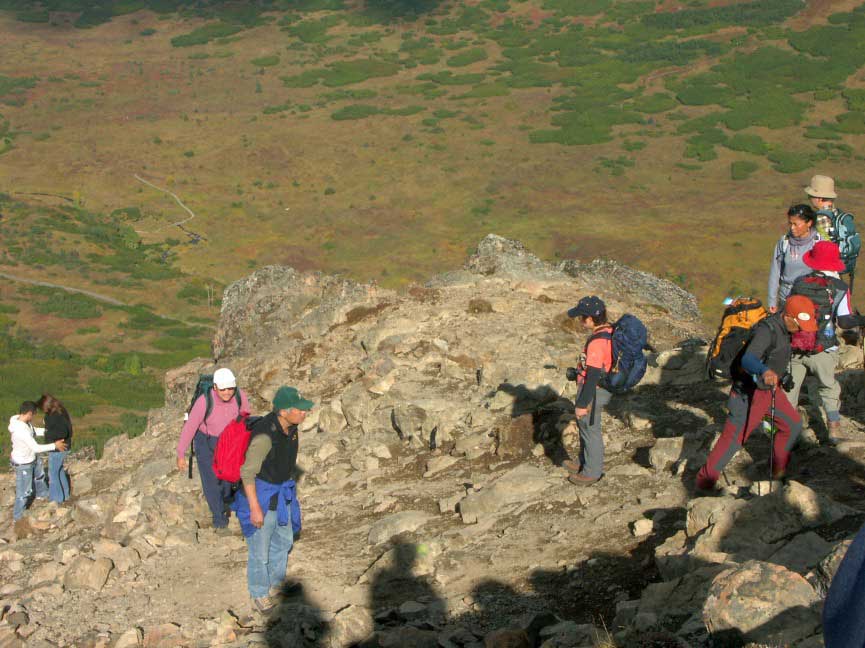 The most common trail etiquette malpractice arises when two hikers meet each other on a narrow trail. There's no sign for this one at the trail head, so who has the right of way? Here are our versions of the rules:

If you're looking for a short break anyway, step aside and let the other hiker or party pass by.

If the approaching hiker/party is struggling or has more of a burden than you, or has fewer options to "pull over", be courteous and let them pass by, regardless of who might technically have trail priority.

And most important and most ignored, everything else being equal, give the right of way to the hiker going uphill!

Why the latter? Think about how most people hike - usually focused downward, a few feet ahead on the trail, watching their footing to try to avoid a face plant. If you're headed downhill, you'll generally see some distance ahead of you on the trail at the same time as you're looking down to where you will set your feet the next step or two. You'll see any hiker coming up hill well in advance of meeting. On the other hand, if you're hiking uphill, and looking down at the trail, your range of vision is really just a few feet in front of you. Clearly the hiker going downhill has the visual advantage, and time, to adjust his position so the uphill hiker can pass. And, it's a lot easier for the downhill hiker to stop and resume than it is for the uphill hiker. Think about the interstate trucker or you on a bike - it takes more energy and time to restore speed if starting from a dead stop. So it is with the uphill hiker, especially if carrying a backpack - let her come on through so she can benefit from the "body in motion" principle in physics. This applies to hikers running downhill too. And just because you're running downhill (nobody is impressed anyway, and secretly hoping you face plant) that doesn't give you the right of way.

That's it - first philosophy should be courtesy and common sense; second is give it up to the horse or the struggling uphill guy!